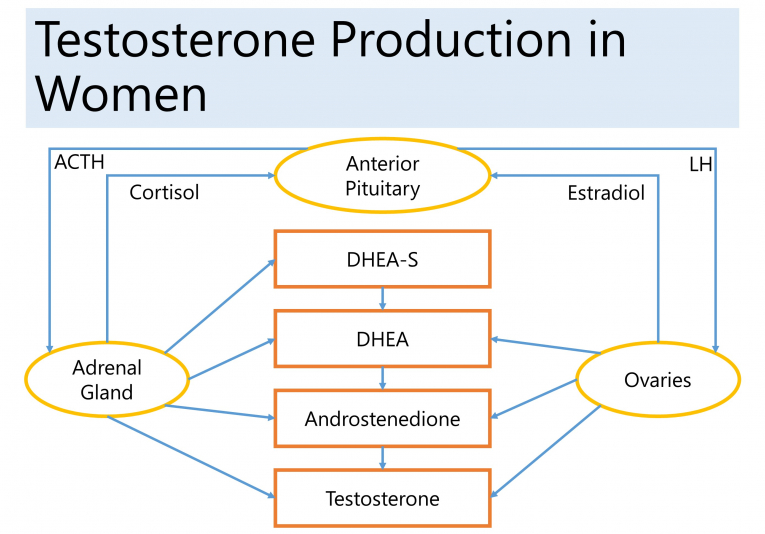 In an age where public awareness has shifted to a greater awareness of testosterone and related hormone therapy solutions, women sometimes feel ignored and left behind.  Silent alarms are often going off within many relationships.  Often, our male patients will tell us, “My wife wants to know if you can help her too?”.

The reality is that both men and women suffer from hormonal decline as they age beyond their 30’s.  It’s a fact of life…and it can trigger a host of issues and concerns within a relationship.  “Why is he/she no longer interested in sex?  Is he/she having an affair?  Are we falling out of love?  Am I doing something wrong?  What is wrong with me?   Why do I feel depressed?”  What started out as the gradual symptoms of hormonal decline can quickly devolve into panic and anxiety within a relationship.

The truth is that both men and women will often express frustration when their partner no longer seems interested in their sexual relationship.  In some cases, both one or both partners will have lost their sexual motivation, and in some cases their ability to perform sexually.  Why is this happening so often?  For many couples, it’s a combination of factors including loss of sex drive, chronic fatigue, irritability, and mood swings.  Sound familiar?  Lights out.  Good night.

This issue is all too common for both men and women behind closed doors but did you know that one of the keys to restoring women’s hormonal balance is testosterone?  Yes, women have testosterone too!  And guess what…when women’s testosterone levels decline over time, so does their energy, body composition and SEX DRIVE.   It’s amazing how the correction of hormone deficiencies in women, including their testosterone levels, can almost immediately restore their energy, enthusiasm and sex drive.  Women are thrilled and so are their partners!

Testosterone is typically thought of as a male hormone, but it is also essential for women as it influences sexual functioning, mood, development of lean muscle mass, and even memory and cognition. Women in their 40’s, will often have about half the level of testosterone that was present in their 20s. We see a significant decline in testosterone levels over time. When women have low or suboptimal testosterone levels, they can experience many symptoms, including sexual dysfunction, vaginal dryness, difficulties to reach climax and a decrease in sexual drive or desire. They can also notice that they have increased fatigue…they’re always tired. It’s also more challenging to stay lean, develop lean muscle mass and maintain optimal body composition. It can have a significant impact even on mood and one’s overall sense of well-being, motivation, confidence, and assertiveness. It can even affect memory and cognitive function.

A study published in the journal of the American Medical Association, showed that approximately 43% of postmenopausal women suffer from some form of sexual dysfunction. Surprisingly, we don’t hear a lot about this condition in women. We certainly don’t hear about options for treatment, including testosterone. This condition can often go undiagnosed and untreated.

Testosterone can be replaced in various forms, but the most common and effective form of replacement for women is typically in the form of a topical transdermal gel or cream. The benefit of doing it in this manner is that the provider can adjust the dose based on the individual patient’s needs and response to therapy.  Testosterone creams can be customized for the needs of the individual patient. When you replace any hormone in this manner, utilizing low daily doses, it is very similar to the way the body naturally produces hormones.

After starting testosterone replacement therapy, women typically notice a significant improvement in all of the symptoms, including increased sexual functioning, desire, and drive. They can also see an increase in energy level and increased ability to develop lean muscle mass. Additionally, they can notice a significant improvement in mood, motivation, overall sense of well-being, and confidence. In addition to that, they may see improved memory and also cognitive functioning.

One other important point to make is that when testosterone is given to a woman, a portion of it will convert to estrogen. The postmenopausal woman who has low or deficient estrogen levels can see improvement in those symptoms that are typically associated with low estrogen, which would be hot flashes, night sweats, moodiness, irritability, vaginal dryness. So, women may experience not only improvement in the classic symptoms of low testosterone but also the typical menopausal symptoms associated with low estrogen.

Several studies support the use of testosterone replacement therapy in women. A Cochran review of the literature found that over 35 trials have been performed, which included over 4500 women. They found a significant improvement in sexual functioning in women on testosterone replacement therapy. Also, a more recent study published in 2014 showed that women on a transdermal or topical form of testosterone had an improvement in memory and cognitive functioning. Several studies are supporting the use of this vital hormone in women.

In terms of safety, there are potential side effects with the use of any medication. As with any medication, including testosterone, this would typically be something that’s dose-dependent. In such cases, typically, the dosage is reduced and related symptoms will soon resolve.  This is the typical process of determining the exact dosage required for each individual patient by the physician.

One important fact to mention in premenopausal women who are still menstruating, is that providers need to discuss the use of birth control with them because testosterone is considered to be category X, meaning it may cause fetal harm if a woman becomes pregnant when she’s on testosterone replacement. That’s just a discussion that the patient needs to have with their provider, “what is your reliable form of birth control,” before prescribing it to them. In the premenopausal woman on birth control, and also a postmenopausal woman, testosterone replacement therapy is very safe. It has a low risk of side effects when used at appropriate doses, and many studies are supporting its use in this population.

It wasn’t until June 2011 that an FDA advisory committee to the division of Reproductive and Urologic Drug Products stated that HSDD (Hypoactive Sexual Desire Syndrome) is a significant medical condition for women. This may open the door for companies to apply for new drug applications for that indication.

It is important to note that unlike erectile dysfunction drugs approved for men like Viagra that increase blood flow to the genitals as long as a man is aroused, testosterone therapy is systemic and needs to be applied over weeks to have a noticeable effect on sex drive in men and women.

Menopause can cause symptoms such as hot flashes which often result from changing hormone levels during the menopause transition. After a woman’s last menstrual period, when her ovaries make much less estrogen and progesterone, some symptoms of menopause might disappear, but others may continue.

To help relieve these symptoms, some women use hormones. This is called hormone therapy which includes estrogen alone or in combination with progesterone and testosterone. Hormone therapy is available orally or in transdermal gel and cream formulations made by specialized compounding pharmacies.

Estrogen is a hormone used to relieve the symptoms of menopause. Estrogen alone may be used by a woman whose uterus has been removed. But a woman who still has a uterus must add progesterone along with the estrogen. This combination lowers the chance of an unwanted thickening of the lining of the uterus and reduces the risk of cancer of the uterus, an uncommon, but possible result of using estrogen alone.

Circulating testosterone in women declines during the late reproductive years such that otherwise healthy women in their 40s have approximately half the testosterone level as women in their 20s. The levels remain stable across the menopausal transition and then either remain stable or continue to decline with diminishing adrenal androgen production with increasing age. In the decade preceding menopause, there is loss of the mid-cycle surge of free testosterone. Despite this, research showing the benefits of androgen replacement has been limited to the postmenopausal years.

Some small studies have been done in premenopausal women, however. One evaluated the efficacy of transdermal testosterone therapy on mood, well-being, and sexual function in eugonadal (normal testosterone blood levels), premenopausal women presenting with low libido. Testosterone therapy improved well-being, mood, and sexual function in these women. Since a substantial number of women experience diminished sexual interest and welfare during their late reproductive years, further research is warranted to evaluate the benefits and safety of the longer-term intervention. Potential side effects that are dose-dependent may be unwanted hair growth, masculinization, and lowering of high-density lipoprotein (HDL).

A direct association between testosterone and heart disease has never been established, but for many years, doctors have suspected that a link exists. The reasoning goes like this: men have much more testosterone than women, and they develop heart disease about ten years before their female counterparts.

Women with systolic heart failure who took low-dose testosterone for six months, on top of standard medical therapy, showed significant gains in exercise and ventilatory capacity and large-muscle strength along with heightened insulin sensitivity, in a small placebo-controlled trial (J Am Coll Cardiol 2010; 56:1310-1316).

TESTOSTERONE REPLACEMENT AND CANCER IN WOMEN

The relationship between endogenous (natural) testosterone production and breast cancer risk remains contentious, with recent studies indicating either no relationship or a possible increase in risk when estrone and estradiol are not considered. No randomized controlled trial of testosterone therapy has been sufficiently large or of sufficient duration to establish whether such treatment may influence breast cancer occurrence. There does not appear to be an association between testosterone and endometrial cancer or other malignancies on review of published studies.

There is no convincing evidence that usual estrogen-based hormone therapy for ovarian failure increases the risk of breast cancer. However, some studies have previously shown that ovarian androgens typically protect mammary epithelial cells from excessive estrogenic stimulation, and therefore a study hypothesized that the addition of testosterone to usual hormone therapy might protect women from breast cancer (Menopause: Sept/Oct 2004 – Volume 11 – Issue 5 – pp 531-535). This was a retrospective, observational study that followed 508 postmenopausal women receiving testosterone in addition to usual hormone therapy in South Australia. Breast cancer status was ascertained by mammography at the initiation of testosterone treatment and biannually after that. The average age at the start of follow-up was 56.4 years, and the mean duration of follow-up was 5.8 years. Breast cancer incidence in this group was compared with that of untreated women and women using usual hormone therapy reported in the medical literature and to age-specific local population rates.

These observations suggest that the addition of testosterone to conventional hormone therapy for postmenopausal women does not increase and may indeed reduce the hormone therapy-associated breast cancer risk-thereby returning the incidence to the normal rates observed in the general, untreated population.

LATEST DATA ON TESTOSTERONE AND WOMEN:

A recent study review that was done by Dr. Rakibul Islam and his team was published in The Lancet in July 2019,  retrieved 46 reports of 36 randomized controlled trials comprising 8480 female participants. Their meta-analysis showed that, compared with placebo or a comparator (e.g., estrogen, with or without progesterone), testosterone significantly increased sexual function, including satisfactory sexual event frequency, sexual desire, pleasure, arousal, orgasm, responsiveness, and self-image, and reduced sexual concerns and distress in postmenopausal women. A significant rise in the amount of LDL-cholesterol, and reductions in the amounts of total cholesterol, HDL-cholesterol, and triglycerides were seen with testosterone administered orally, but not when administered non-orally (e.g., by transdermal patch or cream).. No effects of testosterone were reported for body composition, musculoskeletal variables, or cognitive measures, although the number of women who contributed data for these outcomes was small.

Why Testosterone Therapy makes such a difference for men.